Each year we celebrate those who exemplify our values, and we were excited to recognise this year's winners at the 2020 AGM.

The awards continue to grow in popularity, and this year was no exception, with more entries and greater diversity from kindergartens across all our regions.

We were also delighted to recognise two Community Champions for the first time - people who have gone above and beyond to support our kindergartens.

Congratulations to all the winners and runners up - and we look forward to next year. 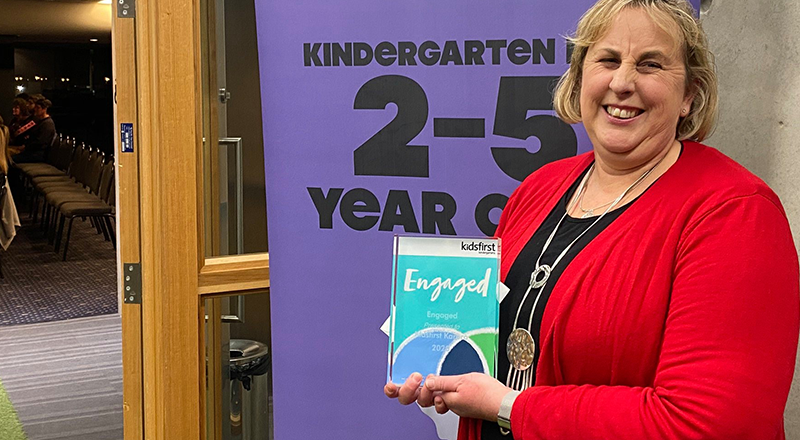 Kidsfirst Karoro's Engaged award: It takes a bit of imagination to turn a strip of wasted land behind your kindy into an orchard, but that's what Kidsfirst Karoro did with a local grant, some visionary thinking and a lot of hard work.

Today, the kindergarten looks forward to enjoying a bumper harvest from the variety of fruit-trees that were planted.

The orchard is also a place of remembrance, with Memorial Trees planted for kindy members who sadly passed away while it was being constructed. 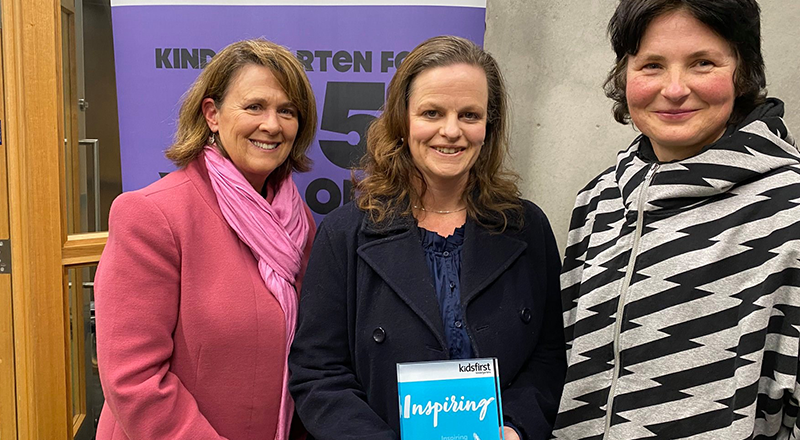 Kidsfirst Wales Street's Inspiring Award: Wales Street won this award for the way they encouraged their tamariki to want to make a tangible difference in the world by looking at rubbish and ways of dealing with refuse. The children researched and developed ideas that led them to becoming involved in recycling and thinking about waste and what we throw away.

The tamariki even made a video to share and wrote to businesses about cutting back on packaging. As well, they took the message home and instigated change in their own lives and that of their whānau. Truly inspiring all round.

Kidsfirst Nuffield won this year’s Passionate award for building a new culture with a shared philosophy. Making a connection to their local environment was something that the new team at Kidsfirst Nuffield placed high on their list. They shared their passion for their local community with tamariki and whānau whilst developing their own cultural narrative in 2019 - building awareness and understanding of Tangaroa, Ranginui, Hinemoana, Papatuanuku. New Brighton beach and its local significance have become an integral part of the kindergarten programme, with regular excursions happening and a focus on making visual connections, with Atua and landmarks recognised in the kindergarten environment. 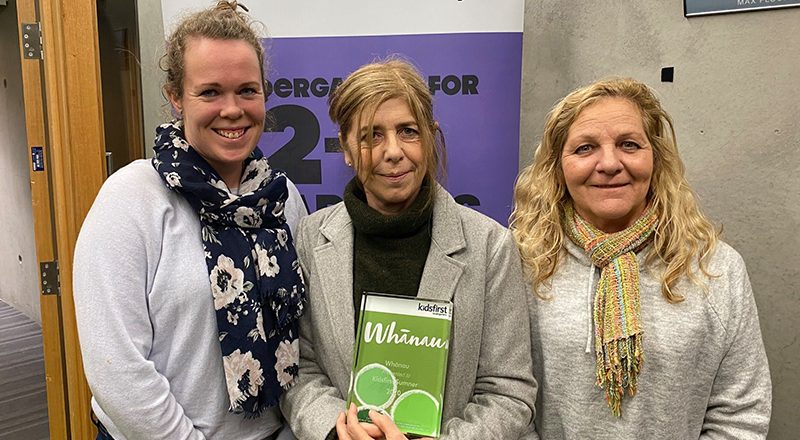 Kidsfirst Sumner's Whānau award: Sumner won the Whānau award because of the many creative and innovative ways they connect with their neighbourhood, from fundraising to flower-arranging classes to working bees and fun-filled excursions. It has seen the kindy become so much closer to their community - embracing whānau in its truest sense.

Kidsfirst Cromwell's Proud Award:  Cromwell really rose to the challenge of raising their profile in the community, making new connections, and introducing new families into the kindergarten.

Their initiatives, including a weekly Stay & Play session, have seen a substantial increase in numbers enrolling at kindergarten and a healthy waitlist. 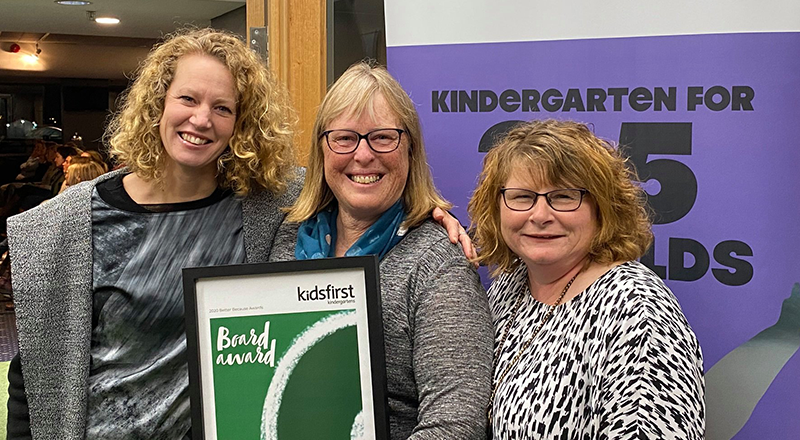 The special Board Award: This year, this very special award was  presented to the team at Kidsfirst Parklands, for the way they embodied the range of Kidsfirst values and incorporated heuristic, child-led pedagogy into everything at the kindergarten. 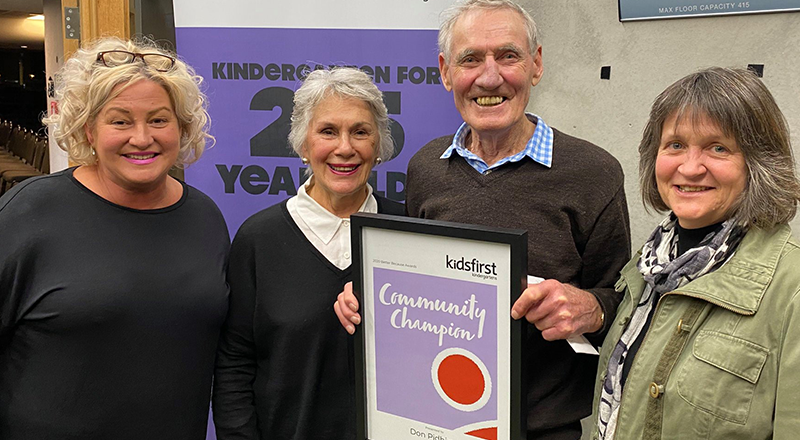 Kidsfirst Community Champion Award- Don Pidhirny: Thirteen years ago, 'Grandad Don' came along with his grandson and offered to share some of his carpentry knowledge with the tamariki. He's still a regular visitor helping them to learn not just how to use the tools, but also all about co-operation, patience, confidence and perseverance when things don't go to plan. Now he also has a Community Champion award! We're lucky to have Don Pidhirny in our Kidsfirst whānau. 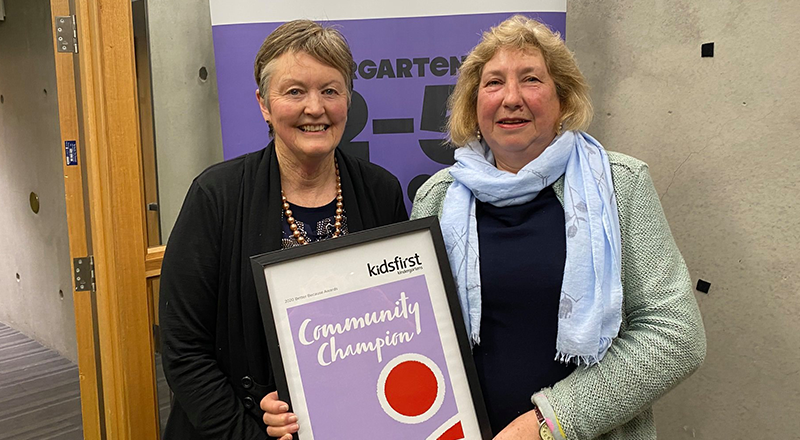 Community Champion Award - Lorraine Brydon: (above on the right with King Street head teacher Jocelyn Cameron) joined her local kindergarten committee way back in 1984 - that's 36 years ago - and she's still involved! Her son was going to King Street Kindergarten and Lorraine rolled up her sleeves and got involved. Since then she has come in virtually every Friday to help out with a variety of tasks that the staff have trouble finding the time to do. A well deserved recognition for a great deal of work over many years. Ngā mihi maioha, Lorraine. 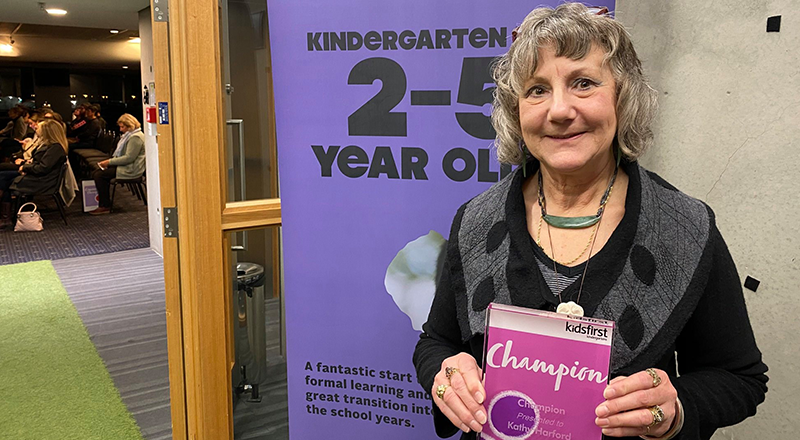 Kathy Harford, head teacher at Kidsfirst Phillipston, was nominated by her kindergarten team for her community connection skills, bringing diversity to the fore and brining the kindergarten closer to the community with events and celebrations.

Tim Eden-Calcott of Kidsfirst Karoro received his award for the many innovative and exciting ways he brought the kindergarten to life - including creating the new orchard, a project that won its own award.

Kylie Arnesen from Kidsfirst Hawea is known for her great attitude, promoting a real sense of pride in the kindergarten and going over and above in her efforts to engage with the community and create a fantastic sense of place.

Congratulations to all the recipients. Well done, and well earned.